My colleague Wisdom posts a comment on this blog, and also asks

Side talk, why i can't find China in the country List, when i am adding a comment?

In looking into this, I checked into the relevant BlogEngine.NET code, which looks something like the following (see CommentView.ascx.cs):

… that looked perfectly fine. It does seem from other .NET framework communications that it is possible for this code not to be all-inclusive.  And, in fact, the BlogEngine.NET code underscores this potential issue, with the following code in the same method:

It also seems, on further investigation, that other blogs besides mine that are based on Blog.Net have seen this issue specifically with Chinese viewers.

Cultural-appropriateness is in the eye of the beholder

In his response to the question specifically about BlogEngine, Mads Kristensen points out that China is on the list.  It's just listed according to its SpecificCulture-EnglishName value, which is People's Republic of China, not China. 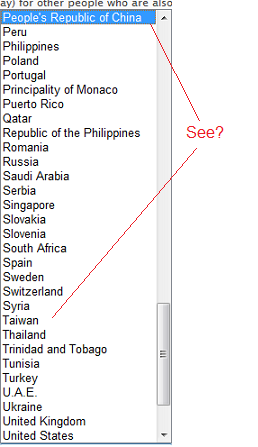 You can see this illustrated in the MSDN post on the CultureInfo class, in fact, where different "manifestations" of Chinese culture info are shown, in response to the following sample code:

So, okay.  That behavior and classification system seems perfectly defensible and understandable…

…But it's not good enough.

Think about it this way: Wisdom,  the consumer of this framework result,  is already working in a language that is not his own, just to read the blog and navigate the list.  I am truly grateful he makes the effort.

Why should he have to realize that the English-speaking world refers to his country as "People's Republic of China", when his motherland-centered heart envisions it as "China", even in English?

He knows he's supposed be navigating this list according to a sort-order based on an alphabetization that is also not his — in which "P" is nowhere near "C".   Why should he look near "P"?

I value Wisdom's comments, and those of the other members of my team.  So, while I "get" the value of the .NET framework generalized approach here, I'm going to include the following, along with the Bangladesh-adding coding example quoted above, in the original code:

When you work in a globally-dispersed team, as I do, you often have to balance two goals:

As goals, the drive-to-consensus and respect-for-differences often undercut each other.

We all do the best we can. So does the .NET Framework, I guess.

4 thoughts on “Sensitivity versus Consistency in Global Communication”