As befits his name, he is black, strong, old, and graceful. If you didn’t know Buster, you would think he was a big cat.

There’s a good chance that the aria he sings to himself, as he wanders around, has an Italian libretto. It’s certainly highly ornamented.

His rescue team (the wonderful people here and here)  thought he would need to be an only cat, but he and Buster have reached an understanding. He has various infirmities, but they don’t slow him down. He has a definite goofy side and, when playing with one of his toys, seems a lot younger than his actual 14 years. He is by turns afraid, aloof, amok, and asleep.

He is not Zachy, but we are a family of four again. 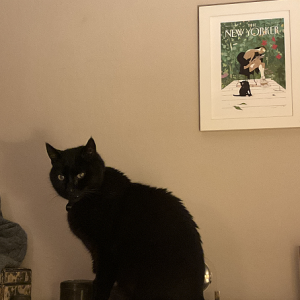