A while back, I mentioned Art Fuller, who taught me to paint a house properly, both inside and out.  He also taught me how to tar a roof.

This all happened at a teen work camp called Lincoln Farm.  I recently connected with some other alumni of that wonderful place, including Peter Blacksberg. Peter has derived a really interesting list of rules to live by, based partly on what he learned at LF.

Maybe with Peter’s permission I’ll share that list here at some point…  at any rate, it got me thinking about all the things that I learned at LF, and all the people who taught me those things.

Art Fuller taught me to paint houses, but Wally Hochman (“Waldo”) taught me to paint on a smaller scale, with oils and acrylics.  Here’s a shot of my first oil painting, from when I was about 12.  It’s still up on my office wall at home.  As you can see, I started dreaming of a guitar player (because I didn’t have a prayer of drawing a bass!) long before I met C. 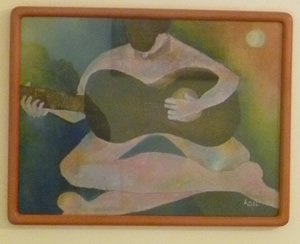 As you can’t see here, we usually painted on masonite.  Wally showed us how to gesso the surface with several layers, and then comb the not-dry gesso in a cross pattern, to give it the proper texture.  We also learned how to stretch a canvas, but Waldo said it was better to learn the older technique first.  It had superior characteristics: durability and maintaining the original brightness of the colors.

Art and Wally had that attention to detail, and to first principles, in common.  I wish more people did.

When I look at stuff like WebMatrix and LightSwitch, I don’t have a problem with it.  I do have something of a problem with people who make a guru-living showing less experienced folks “how easy it is” to build an application in either RAD environment, basically doing nothing but parroting a few MS samples which were carefully designed to avoid exposing any limitations in the tools whatsoever.

These demonstrators often don’t extend what you can do with the tools at all, they’re simply popularizing them, helping give them exposure in a wider audience.  Chances are that they’ve either discovered (or been showed in private, and are helping to pass on) one or two neat tricks that won’t make it into the MS official docs, sure.  That’s another place their value-add comes in.

But IMHO, sorry, it’s all basically worthless without a deeper context.

The “How Easy It Is” People

The truth is, I cringe every time I hear the words “let me show you how easy it is” followed by a demo of design surfaces.  It’s not because easy is bad — easy is great.  But it’s also terrifically hard to make things look easy. There’s a huge amount of  plumbing built in, flushing the difficulty away from the sweet and clean surfaces.

In fact, the first time you need to do anything beyond a demo on your own, you’re just going to feel cheated. I’ve seen this happen too many times.  The person who eagerly viewed that demo now throws the entire architecture out with the dirty bathwater.

Multiple layers of white gesso support the bright colors. Sanding and repairing the wood keeps a new layer of house paint from blistering in the sun.

An appreciation for, and an understanding of, some foundational skills will be required to get any value from WebMatrix and LightSwitch, let alone to extend them.  And this is not an embarrassment, or something to be hushed up so that people think they will never have to write a line of code.  Robust plumbing should be celebrated (and pressure-tested).

Let me take a moment to acknowledge the heroic plumbers of BlogEngine.Net.

I’ve spent some time this weekend upgrading to the newly-released version 2.0.  It’s because their work is robust — and also because I take the trouble to understand it properly — that the upgrade has gone as well as it did.

And it’s because the surface is well-prepared that I could take the opportunity to do a little bit of re-theming at the same time.   I wanted to lighten it up a bit. I hope you like the result.

3 thoughts on “Preparing a Surface”