C and I continue to have medical adventures this year, and I've been a bit distracted in the past few weeks.

But I continued to work on Fulano's problem, although it was clear that local reports were going to take a completely fresh look at pre-processing a report; the ReportViewer renderer doesn't seem to play by exactly the same rules as the Reporting Services server-side renderer.

As you may recall from our server-side adventures in preprocessing, each renderer does have the option of processing report output events in a different manner as suits their content, so the server-side preprocessing code takes separate paths for PDFs and HTML renderers.  It was a bit disheartening to think I was going to go through that again in the local mode context.

As I started to work through this, therefore, I told myself I would accept certain limitations. These turned out to be not nearly as drastic as I originally thought, for example, I didn't have to impose serious page break structure on the results.  But I did find myself humming "They've gone about as far as they can go [Kansas City]" from Oklahoma! a few times; hence the even-odder-than-usual title of this post.

Oh what a beautiful TOC

What are the essential features of a Table of Contents?  The general idea (and it's a classic one) is this: a TOC shows up first in the order of the report pages, but it lists the page numbers for the rest of the report, which in most cases hasn't been built yet.

The general solution (which makes it a classic application for report preprocessing) is to run the report once, record the page numbers, and then run it again with the TOC properly filled out.  To do this "properly" means to render the report exactly the same way the first time as the second, so that the page numbers you record the first time exactly match the pagination of the final result.

1. Following Fulano's requirements (you can read them in full in the previous post's comments), we're doing this in an RDLC, so I've used RS and VS 2005 here.  I'm not entirely comfortable with the VS 2008's ReportViewer implementation with regard to localmode, because it wasn't really updated to handle the rendering of 2008-specific contents such as tablix, so I figure its event sequencing might change a lot when MS updates it properly. Last I heard this was scheduled to happen in VS 2010.

2. Fulano also needs this to work with PDFs.  This has a tendancy to collide with the "proper" pre-processing in an illustrative example, because the first run you're going to get is going to be HTML. For the purpose of this example, I can give PDFs the right behavior by imposing the following layout restrictions:

In my case this meant a page and interactive size of 7.5in * 10in, which will permit the PDF renderer to add its frame for an 8.5in * 11in final result.  It's going to look a bit funny in the HTML rendition, but the page numbers are going to come out right in the final PDF.

This limitation means that I didn't have to put in all kinds of extra code to handle any differences between PDF and HTML render-event sequencing on the local side, neither did I have to test it exhaustively for HTML; each renderer took a separate effort in server mode and I was not willing to go through that again. Instead, I worked on the PDF event sequence, observed what would work for this renderer for the final result, and stopped testing there.

3. I also set the reportviewer to appear in DisplayMode.PrintLayout, to help ensure the same pagination.  I'm not actually sure if this is necessary in the final version or not, but I was unwilling to take chances and test hugely again.  Don't worry, you'll see the code for this, below.

4. I think that Fulano's final code is going to involve instancing the ReportViewer programmatically, so he can feed it the right parameters (to tell the report code when it's running in preprocess mode, to record information, and when it's doing the run that displays the final values).

Consider that, in local mode, the reportviewer isn't going to prompt for parameters. The reasons, aka "rationale", defy understanding, but you do have to remember that local mode represents the "cut-down" version of RDL processing.  With RDLCs, MS is making RDLs available without a ReportServer instance (and license) behind it so they don't have any obligation to do anything at all here.

I've simulated this behavior by exposing a "Reprocess" button on my form.  So, you see the report come up with 0's in the TOC in the form, you wait (please!) for it to finish rendering, and then you press the button.  The button flips the "preprocess" parameter for the report to "off" and then refreshes the report.  After this action, you see the right result in the reportviewer and you can Save/Export the PDF with the right information.

There are a number of interesting things to note here.

5. I've used the Winforms client in this set of experiments, simply because I used a web scenario last time.  There is no reason why the localmode renderers should work differently in the Webforms client, and, even if it did, you should be able to instance the Winforms client silently/programmatically even on a web server to produce a PDF if you are not interested in the visual display of the control in the first place.

The most likely difference in the two environments is permissions problems.   To persist the page numbers in the preprocess run, you have to write to a file or a db, and to read the page numbers in the second run the way I'm doing it (with XML), you have to use an XML object.  You'll see a little code here to take care of that, because even in the fat client the issue doesn't go away, and it should be similar for the Webforms client.  In the server-side version, I covered this pretty thoroughly.

6.  Fulano's requirements are to have different "report chapters" as subreports.  He proposes a "carrot" textbox preceding each one in the main report.  This should  probably work, using similar ReportItems references to what you see here — and if he has questions about exactly how to apply it, he can ask here; he's not shy <g>. But, for the purposes of a sample report, I've just created a set of tables in the main report, and included the reference textboxes directly in each of the tables.

The sample report is, once again, drawn from MySQL Tutorial World database.  It's pretty simple. 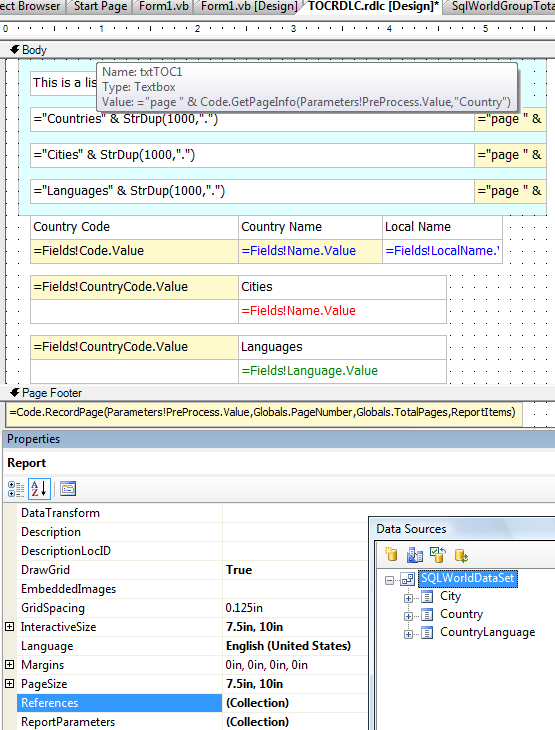 The TOC has one entry for each table, because I think that's what Fulano wants, so I've made the TOC a list. But I've included enough information in the persisted values so that you could potentially have a second level in the TOC (for example, on what page do the Cities for each Country group start?). In this case, it would be a table data region instead.

The report has one parameter to handle "which pass are we rendering", similar to what we've done before. 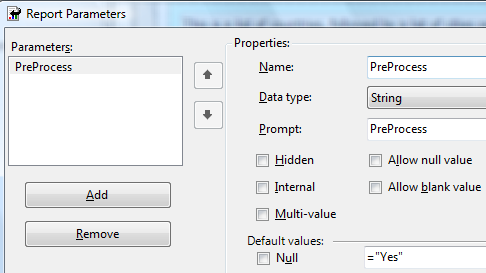 The report has an appropriate reference to the  .NET framework XML classes that I'm using in the code.

There are not a lot of fancy report expressions in this report.

The report code sets up the following variables:

The function called directly from the expression in the report footer does the following to persist values during preprocessing:

The SetRecording function you see referred to above sets up the beginning and end of the XML file persisting values for this run, and the RecordSectionInfo writes the instance information to the file. Here's the full set of supporting functions:

The XML output looks something like this (notice again that I'm recording more than I actually need for my simple TOC in this example):

… and, during the "real" report run, we read values out of the XML file as follows in the TOC report expressions:

Function GetPageInfo(ByVal tPreProcess As String, ByVal tType As String, _
Optional ByVal tItem As String = Nothing) As String
' we're not using code, but we could have more info in the TOC than we currently do
Dim thePage As String = "0", xa As System.Xml.XmlAttribute
If tPreProcess <> "Yes" Then
Try
LoadDoc()
thePage = "[NoData]"
If doc Is Nothing Then
' problem
Else
xa = doc.SelectSingleNode( _
"/root/Item[@currentType='" & tType & "']/@currentPage")
If xa Is Nothing Then
' problem
Else
thePage = xa.Value
End If
End If
Catch Exc As Exception
thePage = " error reading: " & Exc.Message()
End Try
End If
Return thePage
End Function

Act IV – The form code to invoke the report

Finally, here's the load I used on the load of the form, of course also filling the datasets required for this local-mode-rendered report:

… and here's the code under the "Reprocess" button, to run the report a second time:

Not "All Er Nuthin" this time

Well, there you have it. I think a reasonably-extensible proof of concept version of what Fulano needs to do and where he needs to go, and as fully-worked as I can do it in my (ahem) spare time. While the actual code turned out to be completely different, the general approach in the code, as anticipated in my original walktrhough, as you could use in a server-side report.

It's a wacky idea, sure, but wacky extensions to what's possible are what I'm here for.  If you know the musical I've been quoting for, you probably have already guessed that, in my very early days, I was only interested in playing Ado Annie, not Laurie.

6 thoughts on “Walkthrough: TOC+Local Reports, or The RDLC with the Fringe on Top”