This FX implementation executes two types of script stored in FRX Memberdata, reading it from a private cursor in the FRX datasession.

The Dynamics feature  is exposed by the Report Builder Application user interface as a Properties dialog tab.  It provides an easy way for end  users to access the benefits of the EvaluateContents event  for Field Expression layout controls and of the AdjustObjectSize event for Image, and Shape layout controls, without writing code.   Each Dynamic event's  instruction set is  stored in FRX Memberdata; details of this storage are in Appendix A of the whitepaper Data Visualization in Reports with VFP 9.0 SP2.

At runtime, FXMemberDataScript uses the FXListener's FRXCursor reference to generate scripts for the Dynamics feature, and then executes the script during the two Dynamic events.


FXMemberDataScript  also executes free-form, or developer scripts.  These scripts are stored separately in FRX Memberdata according to requirements specified in the next section of this topic.  The developer script feature is exposed through the Report Builder Application Properties dialogs as the Run-time extensions panel (on the Other tab).  It is available for any reportlistener event  triggered by any layout elements, including bands, and also for report-global behavior.

The following table describes the usage of FRX MemberData cursor columns for developer script and its exposure as the Run-time extensions feature by Report Builder application dialogs.


When you write developer scripts, the Execute When textbox in the Report Builder dialog is your opportunity to specify when FXMemberDataScript will execute it.  Note that not all layout elements trigger the same set of events; for example, the BeforeReport and AfterReport events are invoked only on a report-global level, not for individual controls and bands. With that restriction in mind, you can provide appropriate instructions in this textbox using any  one of three methods:
In addition to the instructions you can provide in the Execute When textbox, you can use a CASE statement within your script to provide different behavior for different events.


FXMemberDataScript sends your script a set of parameters when it executes the script.  The parameters, as shown below, are very similar to the to the standard FX subsystem method interface, with a leading parameter added to provide a reference to the FXMemberDataScript instance itself:

Just as with the ApplyFX method of the FX subsystem interface, tcMethodToken is an uppercase version of the reporting event that triggered the call, and the tP1... through tP12 parameters are the parameters sent by the base class reportlistener for each reporting event. As with ApplyFX, these parameters are passed by reference so that your script has an opportunity to change the values.


When you edit developer script through the Report Builder dialog interface, if you haven't written any script previously for this layout element, the dialog  provides some helpful notes to get you started.  These notes include the default LPARAMETERS statement.  You can find the text of the notes that the Report Builder puts in this dialog in XSOURCE.ZIP, in the REPORTBUILDER\memberscript_default_loc.txt file. 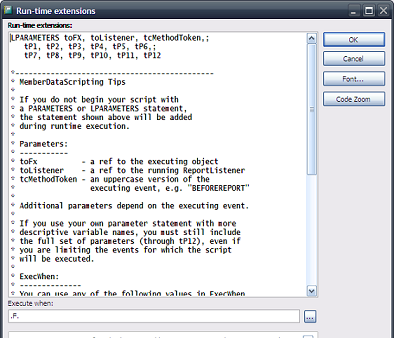 
During a non-PROTECTED report design session, the Report Builder Application invokes FRXCursor to generate a preview of the Dynamic script that will be executed by FXMemberDataScript. This preview is readonly because the script is not stored in MemberData; only the individual attributes chosen by the user in the Report Builder dialogs are stored.  You can, however, copy the previewed Dynamic script and paste it into the Run-time extensions dialog to serve as the basis for a developer script. 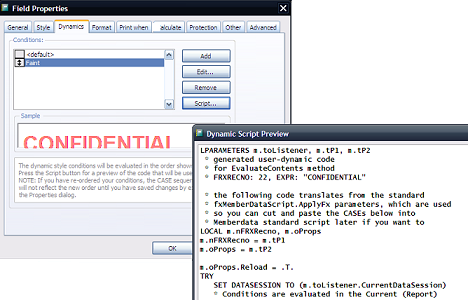 FXMemberDataScript and its private script cursor

While this practice is still feasible in the finished design, in most cases it is more practical for FX and GFX objects to maintain their own "private" cursors in the FRXDataSession, which they can alter and optimize as needed.

The SP2 shipping class FXMemberDataScript is an example of a class that maintains such a private cursor, which it fills during the BeforeReport event. For each layout element with discoverable script of either of its two types, FXMemberDataScript creates a row in this "script cursor". For each row in the "script cursor", FXMemberDataScript repeats the original contents of the columns in the MemberData cursor with significance for its own work: FRXRECNO (the layout element on which action takes place), EXECUTE (the free-form script to executed), and EXECWHEN (conditions under which free-form developer script will execute). It adds a USERSCRIPT column, which holds the contents of the generated Dynamics script.


Because the script  cursor is readwrite, it is possible to alter the contents of EXECUTE and USERSCRIPT on the fly, as many times as needed during a report run.


FXMemberDataScript acts to change the script unilaterally during the report run if its exposed property removeScriptOnFailure is .T. and a scripting error occurs, thus providing an example of this behavior.  The other script cursor columns could also conceivably be altered by script; for example, you could dynamically alter EXECWHEN throughout the lifetime of a report.  However it is probably more practical to use an EXECWHEN value of .T. and a CASE statement in the script in most scenarios.

Note,  however, that scriptAlias is a PROTECTED property of the class.  It is not accessible using toFX.scriptAlias within the executed script.  Because FXMemberDataScript uses the EXECSCRIPT command to execute script, it is not accessible using the syntax THIS.scriptAlias within script, either.  This design aspect is chosen to avoid multiple objects attempting to change the script cursor in the shipping version.  You can derive a class from FXMemberDataScript that provides a method such as AlterMemberDataInfo with whatever method signature makes sense to you. If you are confident of the behavior of all cooperating objects in your environment, you can expose that method as PUBLIC.  In your AlterMemberData method, you have an opportunity to  validate the requested changes and error trap as necessary.

FXMemberDataScript adds only one public member to the required FX interface:

In this scenario, a report has many Shape and Image layout controls, representing checkboxes on a survey response form. Only one such control, in the Page Header band, an Image control filled with a custom logo, requires Dynamics behavior.

For best performance, you should  turn off AdjustObjectSize invocation except when it is needed. You can add developer script to the Page Header band to accomplish this.