This is very cool:

That is a Youtube movie of a keynote presentation at the Google I/O conference.

My first thoughts are:

Note: The title of this post won't make sense until about 42 minutes into the presentation.

My Sony Vaio FE790G has a built-in web cam, a "Motion Eye" lens located in the top edge of the LCD screen border. Last time I tried Ubuntu, in 8.10, I couldn't get it recognised, but the truth is I didn't do much research and I probably didn't expect it to work. I know that in Windows XP, I needed to install special Sony-provided driver.

This time around, given that I am trying to get as deep into the Ubuntu/Linux world as possible, I did some googling, and found this very lengthy and comprehensive thread from other users of Sony Vaios with Motion Eye web cams. It seems that was was needed was something called a "gspcav" driver.

I actually got as far as downloading the driver source code and attempting to compile it (failed) before I thought to ask Ubuntu/Linux whether the driver was already installed:

This command seems to indicate that this is already present on the system. But how to activate the camera? I tried running Gimp and creating a new image from a scanned source, and some intermediate helper application called xsane popped up and allowed me to "scan" from the camera. The results were not encouraging: 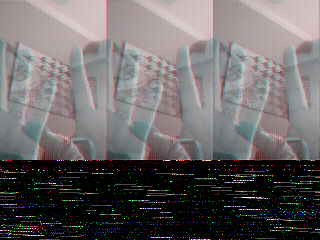 That's me holding up my hand in front of the camera, but you can see my Escher print in the background. Do the three copies of the image represent RGB scans? Is this because the xsane program thinks it is talking to a flatbed scanner? I have no idea, but clearly there is a possibility that I can get the webcam to work. More on this as I get around to it, as having a working web camera is not the highest priority right now.

"It just works" almost applies. My traditional default printer is a Minolta/QMS Magicolor 2350 EN Laser printer, networked on the LAN. I turned it on and went to System > Administration > Printing. Click on the New toolbar button, and up comes the New Printer dialog, giving me a list of two choices: "Other" or "Network Printer". When I clicked on Network Printer, the list expanded to show an addition entry: "Minolta-QMS magicolor 2350 192.168.100.3". The Location host and port parameters were already filled out with 192.168.100.3 and 9100 respectively. Very cool.

I clicked Next and saw briefly "Searching for drivers…", then "Searching for downloadable drivers…", then a new dialog, "Choose Driver". This gave me three options: Select printer from database; Provide PPD file; Search for a printer driver to download. Always the optimist, I selected Select printer from database. The comprehensive manufacturer list contained three possible choices: KONICA MINOLTA; Minolta; and QMS. I tried each of them, and the closest I could get to was Minolta > magicolor 2300 DL. I tried this, and long story short, it didn't work. (I would have been very surprised if it did.) My test page was rendered as a few garbage characters at the top of what could have been a vast number sheets of paper, had I not switched the printer off.

I tried the third option, Search for a printer driver to download. This appeared to be searching the same database as the first option because I could not find a better match from the results. Time to try google to see if I could find a .PPD file for the printer. I can't remember what search terms I used but it can't have been 10 seconds before I got to this gem:

This led me to download 2350lin_ppds.tar.gz, which contained a bunch of language folders, and inside the English folder was KM2350NP.ppd, which allowed me to select the Provide PPD file option. This worked perfectly. I can now print from applications, in duplex too.

This was no harder than searching for printer drivers in Window XP, in some ways easier, particularly in cases where you don't have a CD from the printer manufacturer stuffed with drivers for your convenience.